A few weeks ago we left to go camping in Wales for a week at Silver Cross, with two Scouts from 1st Finchley-little did I know it was going to be even better than imagined!

We set off on the minibus, bubbling with excitement. After a looooonnnggg drive we arrived and started to unload the minibus and put up tents, and after no time we soon got to know everyone and how things work. 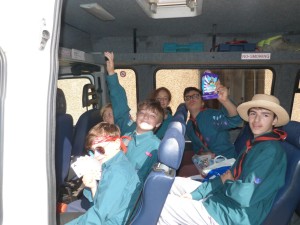 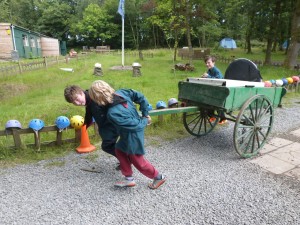 On the second day we were welcomed in the morning by the rain, annoyingly just as we were playing a giant game of battleships, using big sticks to mark out the grid, and pegs to mark out our navy. We communicated via radio to the other patrol (We were the Banana Bunch Patrol led by myself, and the Spaghetti Patrol was led by Carys from 1st Finchley). We also tucked into our first meal cooked by two Scouts (via a cooking/washing up rota) with the help of a parent – Sam, who was absolutely amazing and helped us a lot with meals. After lunch we entered ‘Spider Land’, an outside obstacle course were we could all get muddy and have fun-this was many people’s favourite activity, although a few preferred the shower off afterwards. As the rain decided to stay for the whole day, we had a games evening in the big storage tent, where we played games, including my favourite chocolate game, sung songs, and tried out some of Sami’s instruments he bought with. 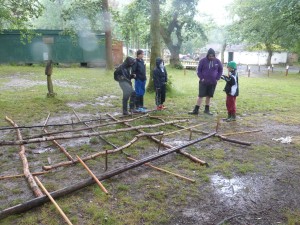 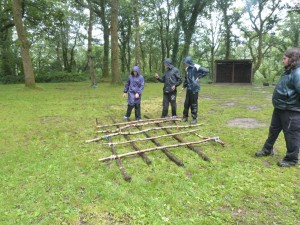 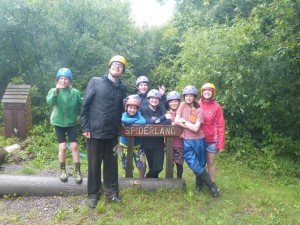 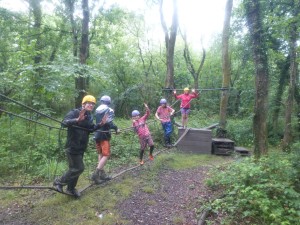 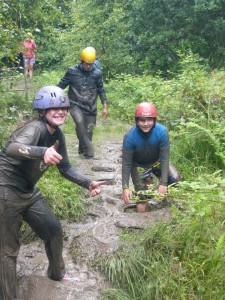 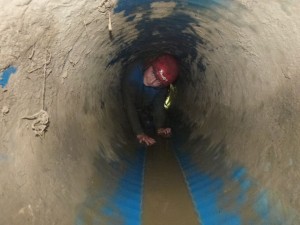 Monday soon came, with some more exciting activities, including a pioneering project where Matthew and I built a washing stack together, as others built different camp gadgets, including a marshmallow holder, for when toasting marshmallows round a camp fire. Some of us also whet exploring the camp site during our free time, whilst others played ‘Kub’. We went down a path in a forest-y area, and discovered a beach with a swing on, which we didn’t hesitate to try….okay I hesitated at first, but soon got on it! We kept walking a bit further, and found a secret beach, with an island on (so we could re-enact ‘Grills on the Island’). We came to the beaches loads during free time; me and Carys came once and walked down the river in our boots, and Matthew would often come here with us to the island where we’d go on our own crazy adventures, including the time Matthew fell off the swing into the water! It was super fun, and everyone on camp went there at least once! 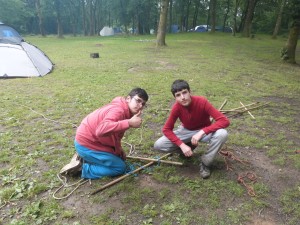 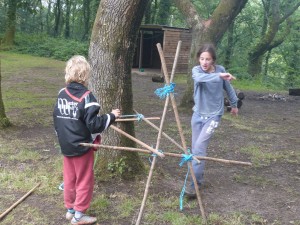 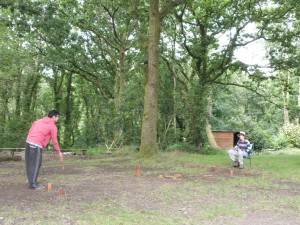 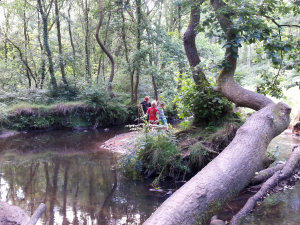 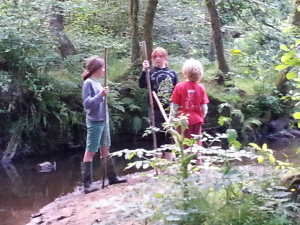 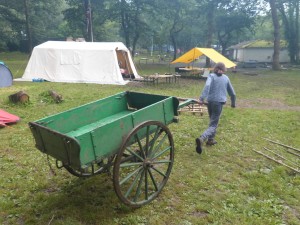 On Tuesday we prepared for the hike on the upcoming day, and in the afternoon we tried out axe throwing which was awesome! I wasn’t very good at that, as I kept hitting the target with the wrong part of the axe! Freddie on the other hand was the best Scout at it, and got a medal (which he lost!). Roni and Sami had a bit of sibling rivalry when it came to axe throwing, but I think it’s clear Sami was a bit better than Roni-but Roni had his chance to shine on the hike. As per usual we had a camp fire in the evening, finishing nice and late at eleven-ish, although some of us stayed a little later to watch it die down. There were plenty of songs, chants, stories and snacks. Marcin very kindly bought some marshmallows to share with everyone from the providor, and they tasted great when roasted over the fire. 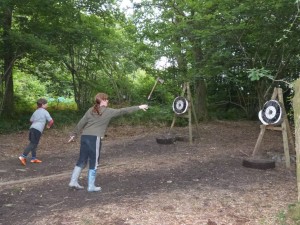 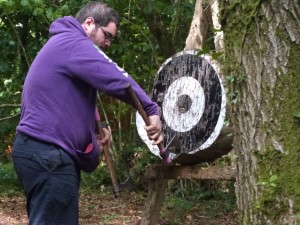 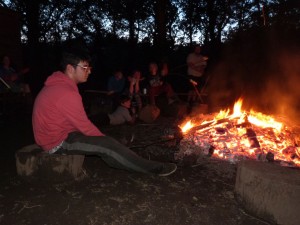 Wednesday was my favourite day: the hike. We set off in the morning in the minibus, and Carys and I directed Sami to the first drop-off point, where Freddie and I jumped off to start the advanced hike, with Roni to help us. We hiked over the first hill singing songs and eating our snacks (mmmm… snacks!). We soon reached a small town which we hiked through, until we reached the second hill, which is the one the other group hiked. We hiked over it, admiring the scenery off the sea and country, and successfully got across the hill. It was only near The National Trust centre were we got lost, which may have been my fault! Ahem! Anyway, after that we all got an ice-cream and a magnet saying ‘I walked to the worm’ (the rocky outrcrop, not the animal. I’m sure we walked past plenty of burrowing worms). The rest of the day was spent on the beach right by the hill, so not many people were there, which was brilliant for us! We played games, ran in the sea, and just had loads of fun! Sami even went to buy us fish and chips! After Tea, as the sun began to sink, Martin was invested by Roni into 1st Finchley Scouts. At the end of the day we packed up and drove back to camp-that was definitely my favourite day! 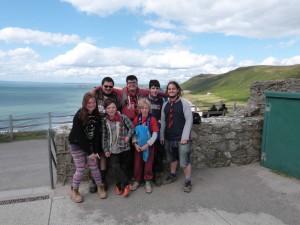 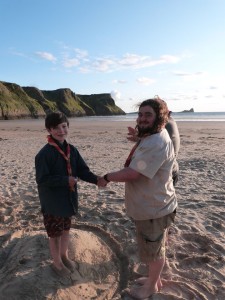 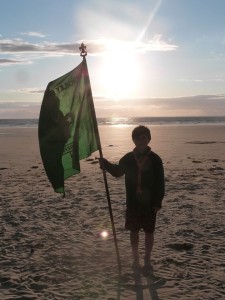 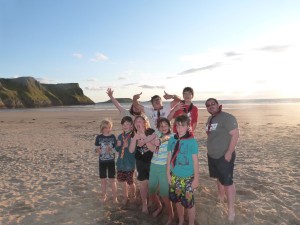 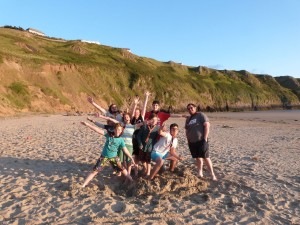 On Thursday and Friday we did several site activities. Archery was great fun-again Freddie won! We also tried out Rifle Shooting, which I was much better at than archery and axe throwing, and in the evening abseiling. My personal favourite of site activities would probably be axe throwing, as I’ve never done It before and it is pretty cool. 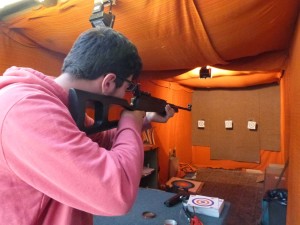 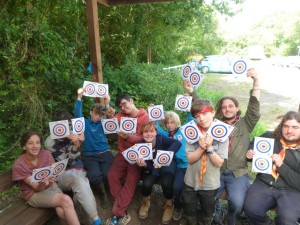 We took another outing on Friday afternoon, to the Waterfront Museum. We went round it for an hour and read all about Wales’ rich, exciting history, and how it revolutionised via working, transport, and people’s views. Afterwards we had to go round and collect as many interesting facts as we could find, including some about Scouting in Wales, and for every one we would get a Jaffa Cake! The leaders then decided we’d go to the beach as it was right nearby. We played there for a while, but the tide soon sent us away. Sami made an awesome Fleur de Lis (Flower/ Scout Logo) out of sand. Once in a blue moon the leaders would take us up to a 28-floor building to have a drink in a posh restaurants. Sami explained it was in fact a blue moon that evening, and thus treated us lucky Scouts. We went up 28-floors in a lift (well, 27-we had to walk up one floor), and had a drink at the very top, gazing over the view. On the way down we sang Zigger Zagger-and it took 25 of those floors to sing it through! Carys and I (Being the Patrol Leaders) organised the last Camp Fire, which was no doubt the best! 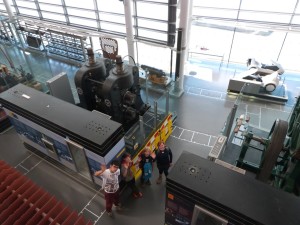 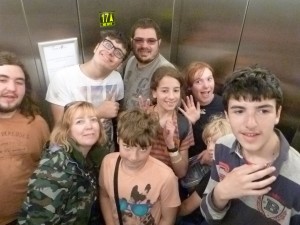 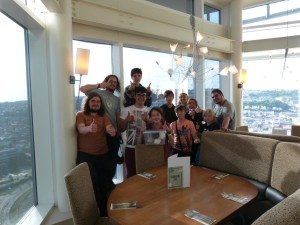 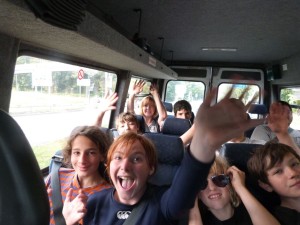 For Tea we cooked Jacket Potatoes on it, and after had bananas with chocolate inside, roasted-delicious! Everyone finished off the marshmallows and other snacks too. Along with many songs, including a song Carys and Sam taught everyone in Welsh, we had a talent show with some amazing acts.

Sad Sunday bought the rain to join the atmosphere. After breakfast we were loading the van for one last time and packing up in the rain. We all said farewell to Silver Cross, and amongst many pictures and souvenirs, we were mostly left with happy memories.

And that, folks, really was THE BEST CAMP EVER!